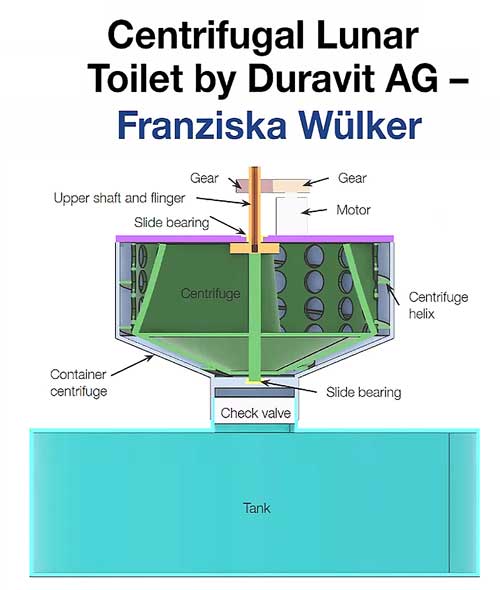 NASA has set a goal to return to the moon by 2024, not only landing but this time establishing a lunar base. Among the logistical complexities will be solving the problem of using a bathroom in a low- or zero-gravity environment. During the summer of 2020, NASA asked innovators from around the world to provide new designs for the Lunar Loo Challenge, envisioning toilets that could be used in both microgravity and lunar gravity, with the potential for adaptations to the new Artemis lunar landers.

The eight-week challenge promised a total of $35,000 in prize money, and included a junior category.

“We’re turning to the global network of problem solvers to design the next-generation lunar toilet,” said Mike Interbartolo, project manager for the Lunar Loo Challenge in the HLS Crew Compartment Office at NASA’s Johnson Space Center. “As we prepare for this extraordinary event, we can’t forget about the ordinary needs of our astronauts.”

While the current lavatories in use at the International Space Station (ISS) operate in microgravity, for this challenge, NASA was looking to up the ante. In addition to taking into account the different needs of a lunar gravity toilet, NASA engineers were hoping to find solutions that would miniaturize current facilities — and increase efficiency.

In October, HeroX gathered winners in the junior and open divisions in Zoom chats. Official was able to catch up with finalists from both divisions.

“Although we usually develop toilets for earth and the technology is different from what is needed in space, I thought that our knowledge of what is important when you use the toilet would help in the development of a space toilet,” said Franziska Wuelker of designer bathroom manufacturer Duravit, an international company based in Hornberg, Germany. Walker, who studied mechanical engineering at Germany’s Karlsruhe Institute of Technology, is responsible for Duravit’s development of toilet flushing. “I use computational fluid dynamics to ensure a good flushing performance of our toilets,” she said.

Wuelker is the only non-American and only woman to place a design in the top-3 of the Lunar Loo contest. Her design uses a centrifuge to accelerate excrement into an 11-liter tank waiting below. A valve and filtration system respectively prevent any excretions or odors from escaping the tank. A seat belt holds the astronaut in place. The self-contained nature of the design protects the astronauts even in the event of a power outage.

With the resources of Duravit at her disposal, Wuelker tested various centrifugal simulations, using fluids with a range of viscosity to mimic urine, feces, menses and vomit. The design came in below NASA’s specifications for weight and energy consumption, and Wuelker believes that the design will work even faster in lower gravity. “For the Lunar Loo Challenge, it was not necessary to separate urine and feces,” she said. “However, I think that this would be a concern if a permanent moon base is built. In principle, it is possible to separate urine and feces using a centrifuge. That would allow urine treatment to reuse the water.”

Thomas Stammel, chief technical officer at Duravit AG, congratulated Wuelker on her winning design. “We are extremely proud that Franziska Wuelker was able to conceive and complete such an ingenious project alongside her regular work.”

On the other side of the earth, in Mariposa, California, Grace Hespenheide would likely agree with Wuelker’s hopes to reuse the water on a future moon base. “Water for toilets is very wasteful,” she said.

Hespenheide is a 9-year old fourth grader, homeschooling due to the coronavirus pandemic. That hasn’t stopped her from looking up at the sky in her rural community, which often offers a star-filled sky thanks to limited light pollution. “I got a telescope for my birthday and make my dad take it out at night,” she said.

As someone who regularly follows news about NASA and SpaceX, Hespenheide was naturally excited about the Lunar Loo competition and entered herself. As a part of her process, the grade schooler, who enjoys math, studied worm, compost, and fire toilets. Her design uses a liner with a chemical that “solidifies the waste so you could capture it instead of it floating away. The liner is then twisted off for easy disposal.”

“I like to look at the craters on the moon,” Hespenheide said. “I go outside and watch the ISS pass overhead. I like imagining people in space 254 miles above the Earth. Those scientists are performing important experiments.” But despite her enthusiasm for space exploration, Hespenheide doesn’t envision herself leaving the confines of earth any time soon. “I would not want to be an astronaut,” she said. “Just with all the things that could happen, I like Earth better.” “It was a real honor to look at some of your submissions,” said NASA’s Director, STEM engagement, Diane Detroye as part of a Zoom briefing held for finalists in NASA’s Lunar Loo Junior challenge. “There were lots of clever ideas, really great descriptions and some really thoughtful presentations about your designs. Now I’m excited to welcome you as part of the Artemis generation, because you’re here and you’re helping us get back to the moon.”

ASPE’s Affiliate Sponsor Program Grows Once Again with the Addition of Bradley Corp.

2021 Emerging Water Technology Symposium to be Convened as Virtual Event